A couple of weeks ago I was invited to run a workshop at the NUS Course Reps’ conference exploring outcomes of the digital student work, and specifically looking at uses of the Jisc/NUS Digital Student Experience benchmarking tool. There was a huge turn-out at Goldsmiths’ College for the London leg of the conference. Like the Leeds leg the following week it was held on a Saturday, and involved a long programme of workshops, many of them quite demanding. It goes to show just how committed students are to improving their courses and sharing their experiences with each other. The NUS officers had also put enormous effort into organising the events. My special thanks to Kate Little who delivered the same workshop on our behalf in Leeds. 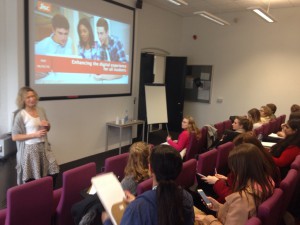 My slides for the workshop are available here. 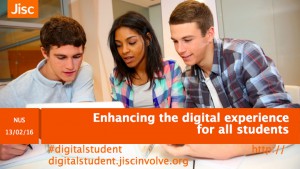 During the workshop I was really impressed with the quality of discussion and thought that students had given to the issues. I think they were surprised by some of my statistics about how uncertain the world of work may be in the coming decade, but that is probably true of their lecturers as well! When it came to the digital systems they are offered on course they were well informed and inclined to be critical, especially of uses of technology that had not been thought through from an educational point of view.

We had a long discussion about lecture capture, with many reps voicing the view that it is useful to students who miss sessions unavoidably, but that it risks changing the nature of lectures and the quality of interactions in them. Some cited examples of students refusing to participate or to answer questions in class if they know that they are being recorded. Others said that recordings gave students an incentive to stay away, though the point was also made that lecturers are responsible for making their classes worth attending, and that students are responsible for how they get the most from their learning. I had to remind myself that I was talking with the most engaged and committed (and ‘responsible’) students, and that others might feel differently. A mention of ‘lecturers who just read through the powerpoints’ was met with a universal groan, and there was energetic nodding when another rep advocated banning powerpoint altogether.

Our discussion also touched on the use of social media for learning. The 30 or so course reps who came to the session had very diverse experiences, even within the same subject area or at the same institution. Individual lecturers seem to be making the choice about how and when to use social features of the VLE, and third party services such as facebook, twitter, and media sharing. On the whole the reps found the use of social media unremarkable – neither positive nor negative in itself –  but they were inclined to be critical of lecturers who do not have the confidence and know-how to use the tools when it is appropriate.

These students have a wide repertoire of learning content at their fingertips and know how to find and evaluate what they need. They are not (yet) part of a culture of digital making, so none had experience of writing aps, coding or developing games, but they recognised that younger learners are developing these skills.

None of the learners in the session was over 30 or presented as having a disability – and all had elected to come and talk about the ‘digital experience’ rather than a host of other fascinating topics that were running concurrently – so they certainly were not a representative group. But I found our conversations wonderfully well informed and thoughtful.

Finally we did get around to looking at the benchmarking tool, taking different aspects in small groups and commenting on how it might be used. Reps said that they could see the tool being used at either a course or at a whole institutional level. They imagined sitting down with other students and marking the statements that felt most true, building up a pattern of ‘where we are sitting‘ within the different levels of development. The most useful aspect – apart from just having the conversation – was being able to see exactly ‘where to go next’ to make realistic improvements.

If you are using the benchmarking tool, we would love to hear from you. Perhaps we could share your experiences and ideas on the blog? Please contact Sarah Knight or Helen Beetham.