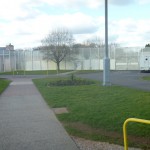 Posted on behalf of Nick Jeans, Senior Consultant (Learning Technology) at Sero.  (Please note the addition to the original post which was added on 6/5/16)

Our learner focus groups have concluded with a couple of visits to prisons, which have been particularly interesting. Shotts prison near Glasgow is a Category A, high security establishment, while Channings Wood in Devon is a Category C: not remotely open but perhaps a bit more relaxed in terms of security. We were struck by the inconsistencies in prisoner learning, varying by category, by governor and by the organisations that run them – HM Prisons, Serco and Sodexo.

The prisoners at Shotts impressed on us that they do not like the term ‘offender learning’ or being called ‘offenders’. They explained that they had indeed been offenders when they had committed a crime, but that they are no longer offending. They therefore prefer the term ‘prisoner learning’ and were very keen that our research should make this point. Shotts makes no use of Virtual Campus, a VLE available in many prisons, yet prisoners seemed to have plenty of access to IT, using it to produce 2 magazines: Snapshotts (relating to Shotts alone) and Stir (http://stirmagazine.org/), a really impressive creative arts magazine with features contributed from 7 different Scottish prisons.

Before we met the learner group, we spoke to the teachers in the staff room, where morale seemed high. They were, however, concerned that too many of the cards in our card sort exercise had no relevance for the internet-deprived prison environment. While there was some truth in this, the prisoners took it in their stride and did not let it inhibit our discussions at all. It was clear, however, that self-directed learning is difficult without access to the internet, so teachers are thrown into a more traditional style as the sole source or conduit of information. One teacher felt staff themselves were less comfortable with mobile phone use because they rarely carry them round, for fear of accidentally bringing one into prison (a criminal offence leading to instant dismissal). The one area where students felt able to use their own initiative in learning was ICT and magazine design.

In contrast to Shotts, Channings Wood uses Virtual Campus (http://testvc2.meganexus.com/portal/index/) although there was frustration that it’s only available when prisoners are working on specific courses. Informal learning did not seem to be an option. Filling out the learner profile prior to the card sort exercise started discussion early, since the short term inmates wanted to document that they used technology widely outside of prison. The issue of being prepared for employment after their sentence came up frequently and this was linked to the lack of appropriate technology in the prison, “because if you’ve been in 10 or 15 years, you’re not going to know what technology is out there.” This prompted the retort: “After 2 years, 3 years, 4 years you’re definitely out of touch” while another commented: “You get out of touch with new apps even more.” The feelings were summed up by another comment: “I do think we’re being deskilled in prison” with a further comment: “It’s done purposely, you know.”

There was a strong sense that their entire lives were on hold while in prison, deskilling them and making reoffending more likely because when released they will lack the skills needed to thrive or be useful members of the community. Two comments were particularly striking: “The government can’t agree what prison is for: are we punishing these people or are we helping them not to come back to prison?” It seems clear that there is huge potential for technology to improve the situation but this will only be implemented when the focus is on preventing reoffending. There is no lack of motivation among the inmates we spoke to: “I would rather go and work on a chain gang, do something useful, than sit in my cell watching TV all day. I want to do something useful to build infrastructure, not just sit behind a door.”

Addition to the original posting from Nick Jeans:

I’ve just been watching ‘Her Majesty’s Prison: Norwich’ on ITV, where it was mentioned that “Prisoners who maintain contact with family are 6 times less likely to reoffend.”  It struck me that the suggestion made at our focus group in Channings Wood about using Skype to maintain family contact could be an effective way of tackling this problem.

Looking up the (very striking) claim via Google, this statement seems to come from a report by the Prison Reform Trust called ‘Keeping in Touch’, (http://www.prisonreformtrust.org.uk/Portals/0/Documents/KEEPING_IN_TOUCH.pdf)which states: “prisoners who were able to maintain good family ties were almost six times less likely to reoffend.”

A further paragraph in the report reads:

“A report by the Social Exclusion Unit, Reducing re offending by ex-prisoners (SEU 2002), noted that 43 per cent of sentenced prisoners and 48 per cent of remand prisoners lost contact with their families when they entered prison. A number of barriers hindered contact. For example, average figures for distance from home were 56 miles for sentenced prisoners, 66 miles for women, and 6 1 miles for young offenders, with return journeys taking at least five hours. The Prison Reform Trust reported that 62 per cent of prisoners in England and Wales who were not receiving visits said that someone would probably visit if travelling to the prison were easier (Farrant 2001). Prisoners in the most recent Prison Survey in Scotland (SPS 2004a) most commonly cited distance as one of the difficulties their visitors experienced (67%), followed by cost of visiting (58%) and lack of transport (46%). Lack of information about visits and visiting procedures, inconvenient visiting times and inefficient booking systems, poor staff attitudes, the unpleasant prison environment, and drug detection procedures, provided further disincentives (Loucks 2002).”

I’m conscious that these are rather dated reports, but further searching turned up ‘Minutes of the All-Party Penal Affairs Parliamentary Group held on 1st April 2014 at 5.00 pm in Committee Room 5, House of Commons’, where ‘Gillian’, a member of the Family Members Advisory Group that meets regularly to advise Action for Prisoners’ Families, said:

“technology offers huge opportunities, both for easier phone calls and the possibilities of video calls.  We know there have been successful trials of putting phones in cells. Prisoners, their families, and even officers agree that it has been beneficial, so it would be a good idea to roll it out. Prisoners want to phone home in the evening when families are in. In many prisons, prisoners are locked in their cells in the evenings and pressure on the few ‘wing’ phones is enormous. There are terrible queues, leading to short conversations.

I have been thinking about the idea of establishing video links, which would be brilliant for allowing prisoners contact with older or disabled relatives, or those at a distance. It would also be a way to keep in touch with their children, so that children might be spared both the long journeys and the realities of prison visiting. It isn’t very nice for children visiting prison, and I worry a lot about the children I see.  Video links would be amazing in that way, and for those prisoners who don’t get visits too, of course.”

With over ten years experience working with prisoner education the two prisons sampled are a good representation of national practice. Although internet is not accessible there are ways to provide real world learning experience using technology such as vle s however these are not used to their full potential or consistently throughout all establishments. Two courses designed to educate learners about emerging technological innovations and how to apply them to their own start up businesses are Creating and Starting a digital business with progression from level two to level three. These courses are now on the pet ( prison education trust) list for learners to access through distance learning. The materials are equally suited to be delivered on the VLE. App development , virtual and augmented reality are covered. Virtual reality content could be a way that learners immerse and apply the skills their courses have covered whilst enhancing the overall learning experience . This untapped market is hungry for innovation and a change from traditional delivery methods. I for one would like to collaborate on any project that supports rehabilitation and reducing reoffending through technological advances and initiatives. Steve Wileman – Head of education

Hello Steve,
Thank you for sharing these valuable comments and insights. It would be great to encourage collaboration and innovation in this area – one where the benefits to learners would be immense.
We would be interested in hearing from others who are working in or have been involved in supporting prison/offender learning,
Sarah

Hi
I read this with interest. It paints a realistic snap shot of what is happening in UK. There are small pockets of ‘innovation’ and can be best observed in other countries at the moment. I have been researching media and digital technologies in prison settings for a while now. Much have my work has focused on the user experience but more recently has included staff experiences of this too. I have also published on this topic. I would be very interested to learn of any new innovations taking place our prison/secure settings.
Victoria Knight
De Montfort University

I don’t know whether it’s relevant or helpful but the non-proprietary OpenSimulator (aka OpenSim) provides a basic desktop VR environment that can be run on a server inside a firewall, locally on a PC, from a USB key and, at a pinch, from a Raspberry Pi. It sees some use in colleges and higher education although the amount of packaged courseware is limited. However, environments can be saved and reloaded with relative ease. There is also support for NPCs and the environment is both scriptable (it uses the same language as Second Life with extensions) and extensible.

Yes I agree, I used Open Sim when I presented at the Virtual Worlds Best Practices in Education convention last month and thought the method you referred to above would be an ideal way of integrating VR into the restrictive prison environment.

If funding became available to support this initiative I would be very interested in collaborating.

Sad to hear that the VC is not being used North of the boarder. The Virtual Campus is a fantastic tool that I have used over the last five years. The content is developing and most importantly the enthusiasm to use the VLE. What is really exciting are the learners creating and developing the content. Innovation!!!