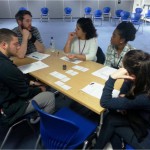 During the past week we have run the first three learner focus groups and these have been interesting, varied and challenging. We’ve discussed the issues with a group of child care learners – largely school leavers – at InTouch Care in Sheffield, a group of nurses studying functional maths under a tutor from the local ACL service at University Hospital, Stoke-on-Trent and a diverse, highly involved and articulate group of learners studying a range of programmes at Lewisham & Southwark College.

Generally the materials have proved appropriate in stimulating discussion and eliciting responses; the modifications made to the Learner Profile form and the stimulus cards have held up quite well, but we may tweak the stimulus cards slightly in the light of experience. ‘Basic ICT skills’ has caused considerable discussion: is this too vague a phrase (even with the added descriptors) and are these skills that all learners would expect to have mastered before starting their course? The final group of cards ‘Making good choices’ has provoked the most discussion and substantial differences of opinion, especially where groups of learners are studying on a variety of programmes. But a common feature to all three focus groups has been the importance they place on understanding and feeling confident with the technology they encounter in the workplace.

With all groups we have been very conscious that we are taking up precious time when they need to be studying or are needed in their workplace (working with a group of nurses I was dreading a major incident happening which would have called them all back from their class!) and the learners we have spoken with have been almost too unselfish – many have been inclined to consider what they think other students might want, rather than concentrating on what’s really important to them as individuals; they have, for instance, felt the use of technology to cope with learning difficulties or disabilities was a priority, even when they did not need any adaptations themselves. None of the groups to date have reached the same rank ordering of the various sets of cards.

We now have a short pause to digest the outcomes from these first three groups, before launching into a further run of focus groups from mid-November until mid-December. There’ll be more news from these when we’ve seen what pictures and themes emerge.