In the run up to Christmas we ran five further learner focus groups: three in ACL and two at private training providers. The ACL learners included a large and lively group at Carmarthen and smaller groups in Leicester and Derby, with Lifetime Care in Bristol and Realise Futures in Lowestoft providing the trainees.

There have been distinct, but not unexpected, differences in the age ranges and prior qualification levels of the groups: the ACL learners have an average age of 44 and are likely to be taking courses at level 2 or below, whilst the trainees have an average age of 23 and most are studying at level 2 or level 3. There have been rather more female than male learners in both the ACL and training provider groups and an interesting number of learners both with learning disabilities and for whom English is not their first language – given the location of the largest group it was not surprising that the first language was Welsh for several of them. 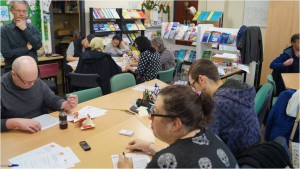 Carmarthen learners – note the very young one in the background!

We have reviewed the learner profiles and the outputs from the discussions and card sorting exercises. Conclusions at this stage are very tentative as we still need to accumulate more data for a robust analysis. The learner profiles suggest that age is not an especially significant factor in technology device ownership or use, but there are some differences emerging linked to gender and employment status. Males in our sample are more likely to be in full time employment than females and to have better access to a PC or laptop at home, but generally have lower prior qualifications. Just under three quarters of the sample claim to use their PC or laptop every day, with females slightly more likely to do so and more likely to customise tool bars and colour schemes. They are also more likely to use social media and messaging (though not directly for learning) and to upload photos to a device. Over 80% of both sexes use Google.

The card sorting exercises have been very interesting and generated substantial discussion in almost all the groups. All of the cards have been selected as important by at least one group of learners, reflecting the broad range of the sample. However, patterns are starting to emerge, with fast wifi with good connectivity and the availability of a PC, laptop or tablet at the course centre identified as the most important aspects of access to technology. In spite of the slight confusion surrounding ‘basic ICT skills’, confidence in using technology scored most highly in the useful skills category and experience with technologies used in the workplace was considered extremely important.

We will be elaborating the initial findings at the first of the consultation events in Bristol on 17th February. However, we are still not satisfied with the size and breadth of the learner sample and we have already planned further focus groups later in February, with apprentices in a large college in the south west of England and with offender learners in a prison in Scotland and the full results from these and possibly another additional focus group will be shared at the April consultation events in Manchester and Leicester.